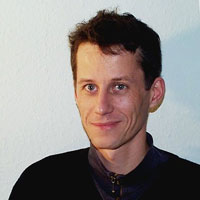 Stephan Brinkmann was trained at the Folkwang University Essen. After his studies he joined the Folkwang Tanzstudio and at the same time began to work with Pina Bausch, whose company he joined two years later. After having left the Tanztheater Wuppertal as a constant member he concentrated on choreography and teaching and created works in Germany, Costa Rica and Australia and taught in Germany, Italy, Poland, Korea, Costa Rica, Australia and China. He is now a professor for contemporary dance at the Folkwang University Essen.
His class is based on the Jooss-Leeder-Method, that was developed by Sigurd Leeder and Kurt Jooss in the first half of the 20th century in Essen on the basis of Rudolf von Labans theory of dynamics and space. The class is based on fundamental movement principles like the principle of tension and relaxation or the principle of weight and strength. It works with the distinction of different movement qualities and a specific use of direction and design.