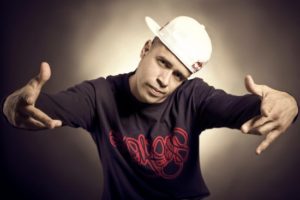 Crazy Legs started b-boying in 1977 when he picked up moves from his cousin and other local b-boys in the Bronx. At the age of 12 he battled his way into the seminal New York b-boy crew the Rock Steady Crew.Legs quickly gained notoriety as a dancer and in 1981 the Village Voice credited him with the creation of the classic b-boy move called the continuous backspin or “windmill”. That same year he was also written up in National Geographic, The New York Times, and New York Daily News. By 1982, the dance took Crazy Legs and the Rock Steady Crew to Paris and London and in 1983 the crew performed for the Queen of England. Amazingly, this was just the beginning.Crazy Legs took the dance from the floor to film, making appearances in Flashdance, Beat Street, Wild Style, Style Wars, and The Freshest Kids (which he co-produced). He’s choreographed music videos for Wyclef Jean (which was nominated for an MTV Award for Best Choreography) and multi-platinum artist Moby. Aside from infiltrating the entertainment industry, Crazy Legs has appeared in commercials and print ads for major corporations including Coke, Sprite, Verizon Wireless, Sean Jean, Avirex, and Nike. He even signed a deal with Fila Sportswear, making him the first b-boy to get a sneaker company to honor a group like the Rock Steady Crew with it’s own sneaker.It’s far from “all business” for Legs. Being a true hip hop pioneer, he’s never forgotten where his roots are truly at. “I enjoy teaching more than anything. I enjoy working with kids and giving back to the community. So expect me to never turn my back on the hood.” He backs this point by volunteering his time and reputable name to teaching the art of b-boying and preserving the power and integrity of the movement he helped start and keep it growing for generations to come. His efforts have been recognized and honored, giving him an impressive resume of awards for professional and charitable work, including a place in the Hip Hop Hall of fame. In 2003 alone, he was presented with the Source Youth Foundation Image Award, received the AARTS Award from the Bay Shore Schools Arts Education Fund, and honored as the National Godfather of the Jersey City Puerto Rican Day Parade. Legs was still steady hitting his stride in 2004, being honored at the first Annual VH1 Hip Hip Honors and signing an endorsement deal with Red Bull Energy Drink.
From having an official “Rock Steady Crew Day” in both New York City and Las Vegas to worldwide respect and recognition, the fame hasn’t gone to his head. His focus remains on the importance of youth, community, and preservation of hip hop as a vehicle for expression and change. Why dedicate his life to a cause like hip hop? “Love of music, reputation, and tradition. Gotta keep every aspect of hip hop that is positive alive and pass it on so that it can be used as a tool by others to advance in life and express themselves when they have no other outlet.”